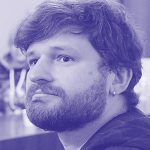 Several weeks before the war, I bought a film camera. It became one of the few things I took with me when we were leaving our flat on the second day of the war, not knowing if we would ever go back there.

I learned from my dear friend Liia Dostlieva that you should take family photos with you. All her albums were left behind in occupied Donetsk in 2014. In a single day Liia became a person without a past. This fact gave birth to her artistic project Rekonstruktsiia Pamyati (Memory Reconstruction) in which she tried to restore her family photos by making collages of photos she found at flea markets.

So, I knew this. But even so, when choosing between children’s boots and a photo album, I opted for the pair of boots. And the film camera still had some film in it. I knew the first shot was too dark because I forgot to open the aperture wider. It was of Romchyk at his children’s concert at the Philharmonic.

We did not photograph our two previous pregnancies for some reason. And I bought this camera to photograph my wife with this new life inside.

With Romchyk, my wife’s labor lasted for a long time. Tymofii was long himself. I remember how it was. Two crumpled bundles, so different from the babies we see in commercials. I will not be able to see my third child’s birth.

I cannot shoot a gun. After all the exhausting hours in the line on the border, we were sent back in the middle of the night. The resolution says you need to have three children to leave! And the third one is not born yet.

The first roll of film we used while walking, drinking hot chocolate and feeding ducks. I had an opportunity to shoot and develop the photos.
The day when we were transferred into a new reality by a friend’s frantic call, we still had an opportunity to have a quiet walk along the Dnipro with our younger child.

— Fireworks, daddy! — my son cried out in delight, on hearing the explosions in Brovary. It was the first time during this war when I nearly burst into tears…because my son loves fireworks. And then we hid in a cellar. And I realized that they can’t sleep like that. And that I am not a hero. And that it is difficult as hell to make decisions in such kinds of situations.

So in the early morning dusk I decided to pack this camera, instead of a trimmer I could really use right now, instead of leather sneakers or potted pine trees that we grew from cones Romchyk found in a park. And then I decided I did not want the film with the first darkened shot from Romchyk’s concert to contain pictures from a cellar. Or chaotic relocations from one place to another. Or any evidence of the war. This war should not have happened. Kids should not hear the sounds of explosions. They shouldn’t be pulled out of their beds to sleep in cellars. And to save them from these horrors is my task for this war.

In the photo, you can see my wife from her past life, who several days after the photo was taken had to sleep on a cellar floor. Who put up with her overly irritated husband, with her naughty kids, with all my unbearably wrong decisions. Who waited in the lines on the borders. Who went back. Who waited again. Who will give birth to my children in quite a different way from what we expected.

She will manage, I am sure. She is courageous. She can do anything. She will be able to do that without me.

The bus driver asked for a price that would not make him happy, and I did not haggle over it. I could see a wailing father near us, letting everything he had gone in an unknown direction. And I also almost let myself cry. But I took three breaths, clenched my teeth and refrained from crying. Hell, yes, I managed to stop. So, I can keep it together. For now, that’s an accomplishment.