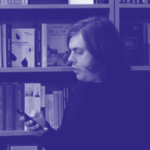 The neighbors call her auntie Ira. Auntie Ira often gets sympathetic looks. Everyone can see that she’s overweight and has huge problems with her legs, so although she’s not old she walks slowly and uses a cane. What you can’t see, but it shouldn’t be surprising, is that she also has high blood pressure.

So, you can imagine how difficult it must be during the endless russian bomb and rocket attacks for auntie Ira to walk from the second floor of her building in Kharkiv down to the first floor, and then to the basement, where they’ve set up a makeshift bomb shelter. That’s why she often doesn’t leave the basement for days, keeping her spirit up with gloomy irony:

– Natasha, you can’t seem to put on any weight.

Like most people in Kharkiv, Ira speaks russian – albeit with a Ukrainian accent. She always liked russia, voted for parties that campaigned on a pro-russian platform. During the tumultuous events of 2014, when Ukrainian activists clashed with people who wanted to raise the russian flag over Kharkiv in anticipation of the arrival of russian tanks, and the famous song about putin was heard for the first time, auntie Ira would ask:

In spring 2022 this woman’s rhetoric is unrecognizable.

In the phone I can hear explosions and a relative who is still in Kharkiv, and, surprisingly, has the strength to laugh, tells an unexpected story of how auntie Ira, sitting on a wooden chair on the concrete floor of the bomb shelter, rubbing her massive hands against each other, looked sternly at her neighbor and said threateningly:

– I’d take all those katsaps (offensive synonym of the word «Russians»), forgive me Lord, and strangle them with my hands!

I’ve often heard and read the not so funny joke that we Ukrainians should one day erect a monument to putin for having done more than most anyone else to unite and strength Ukraine internally. I wonder what color the russians will paint this bloody dictator in their history? Today we’re witnessing a bizarre historical paradox: putin and his minions (as well as those who are silent and turn a blind eye), with their bombs and rockets, the killing of children and pregnant women, the old and young, women and men, destruction of symbols and heritage, transportation and infrastructure are cultivating a sincere and fiery hatred of russia and russians among largely russian-speaking Kharkiv and other cities that just yesterday were their most sincere friends and sympathizers. And increasing you will hear people cursing russia on bombed out streets and nervous social networks in russian.

It seems that putin is the most sophisticated and most effective russophobe in the world – the number one russophobe.

The theater formerly known as the Alexander Pushkin Kharkiv State Academic Russian Drama Theater of Kharkiv posted the following message on their website:

«In this difficult time for our country and our people, when the russian occupier has invaded our land, is destroying our cities and villages, killing civilians, including children; when our beautiful Kharkiv is completely destroyed by russian Grad rockets, only because it greeted the occupiers with strong selfless resistance instead of flowers, bread and salt, proving that Kharkiv is Ukraine; we, the staff of the Kharkiv Pushkin Theater, believe it is necessary to change the statute and name of our theater by removing the word ‘russian.’

Together with Julia Stakhivska, Oleh is a complier of «Ukrainian Avant-garde Poetry of 1910–1930s» anthology. He is a compiler (jointly with Iryna Zabiiaka) of the book of Ukrainian translations «A Walk around the Brewery» of the Czech poet Ivan Wernisch.

Laureate of «Smoloskyp» and «Molode Vyno» literary awards, Valerian Pidmohylnyi Prize, poetry festival «Kyiv Lavra», «Courier of Kryvbas» journal. He is also a laureate of the «METAPHORA» Prize for translation of the Czech poet Ivan Wernisch jointly with Iryna Zabiiaka. Oleh is a member of PEN Ukraine.