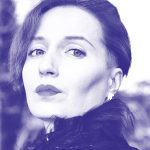 The well-familiar smells ground me at this stage. For example, a smell of a just-made molotov permeating the hallway.

When you dash into the car while the air raid siren rings, when you struggle with the heavy packs and forget that it has recently rung just to hear the sudden ‘all clear’ sound–and the whole body convulses, overcome with the sharp survivor guilt. Because here you are, unsmashed again, while at this very moment they strike at the cities that you hold dear and the people you love. Although, obviously, your current escape is more of a temporary static error, merely provisional. All safety is temporary and provisional, while the russkis aren’t eliminated.

It turns out, the young grass that has started shooting forth along the heating pipes by the end of February can be the opposite of gentle. It’s belligerent. And you kind of feel its blades with your flesh, the sharp pervasive ingrowth, upheaval, and the parting of layers that separate the darkness where it germinates from the external light. The reason is, the black flame lives in this land below–the same that we were afraid to recognize by the name, and finally, it raises to surface alongside the young grass. The gibberish on how at this very moment a story-like knightly spirit has suddenly awakened within the people is simply inapt, outdated before it can even start being beautiful, easily blasted away by the first explosion wave. The other thing holds.

The DEMONIC FORCE. A willingness to emptyhandedly challenge that which has all the chances to annihilate you. To face it, even though bitter and tired, but unafraid–because you feel, not even recognize it, but feel in your guts this dreadful demonic force. Everything has already happened, so bring it the hell on. Even if you end up six feet under, you will merely return to the black flame, and you are the flesh of its flesh–but the enemy it will turn into the unnamed ashes. Is already turning.

There’s no time to think of it yet, but the people who stayed to protect their cities and those who left will be later divided by a colossal abyss in the language of self-description. I know this for sure, as I’ve seen the consequences of a situation like this in the Balkans. And no, it’s neither an accusation nor a reproach to those who had to make such a choice. Of course, we will share with these people the burning hatred that still has a long time to boil. But this black flame, this demonic force will only suffuse you at your homeplace, where you grow from. It steeps from your soles and rushes to your head. And it’s a rare thing in life that can equal the fatality and power of the moment when it possesses you.

When one of the foreign media asked me for a comment, they asked, among other things, why do our people curse so much when filming the destroyed enemy vehicles and bodies of the done-for invaders. The honest answer would be the flame ripping through the throat of every defender here, escaping the limits of a human language–but how do you explain something like that. That is why I just said: this is how we cough up the poisonous garbage of the body fragments currently littering our streets.

This is our Third Liberation struggle. We will be deathly. You’ve awakened the hell, you curs.