Alphabet of War: Solia her dad

Alphabet of War – is one of the most powerful stories from the Russo–Ukrainian war. It is an exchange of letters between a soldier, Yevhen Stepanenko, and his daughter, Solomiia (Solia). When the letters were written, the father was fighting in the Donbas while his daughter waited for him in peaceful Kyiv. Now he is assembling foreign legions to head back to war-torn Kyiv, into combat that has taken on new dimensions. But once again, Solia is waiting for her dad.

“To make sure my letters didn’t get lost and Dad read them all, I decided to make each one start with a letter of the alphabet, in order. It was more interesting than just numbering each letter”, says Solia. That’s why this audiobook in Ukrainian has 33 chapters. Each of them is a little story that happened to Solia and her friends in quiet Kyiv, and almost simultaneously to her dad in the war zone. But this is more than personal family stories. It’s something much closer to all Ukrainians; something capable of touching anyone’s heart, anywhere in the world.

The world is arranged very simply.

At the very centre of the world is our building, where I live with Mum, Dad, and all our animals. It stands right at the top of a hill, overlooking the entire city.

Our flat is right up under the roof, and in the morning I hear drowsy pigeons murmuring beneath the eaves. Like me, the young pigeons probably don’t really want to get up and go to their pigeon school.

The first to wake me up is Chucha, our veteran cat, who Dad got from his friends in the war. Unlike normal cats, she has no fur at all, and she’s got no claws on her front paws.

Dad said that Chucha’s previous owners made her have an operation to stop her scratching the furniture. I’m not surprised Chucha preferred to run away into the war, rather than stay with people like that.

After Chucha, my dogs, Doganiai and Yesenin, burst into the room.

If it had been up to me to choose our dogs’ names, Yesenin would be called something different today.

Everyone calls Doganiai something else, anyhow – Tato Do might as well be his second name already.

Six of his babies were born recently.

When the puppies grow up, I wonder if Tato Do will take them to kindergarten?

Every morning, Mum and I go to school first, then to training, and back home again.

Each day is just like the last. Mum once joked that, if someone asks what day it is, it’s best to answer Groundhog Day No.144.

One evening was particularly gloomy at home. Even the dogs were lying around, sighing, instead of chasing the cats.

I climbed onto the bed, under the covers, and counted how many more groundhogs were left until Dad came home.

So, I thought I’d write him a letter. But just one letter is like one dog: it’s very sad. Then I decided I should write as many letters as I could.

To make sure my letters didn’t get lost and Dad read them all, I chose to make each one start with a letter of the alphabet, in order.

It was more interesting than just numbering each letter.

And I could make up a story for each letter, or remember something and write about it.

Here are just some of them:

I can’t imagine where you live in the war. I remember when Mum and I went to visit you at the training camp, and it looked like when we go camping – tents with stoves in them, and a fire where we toasted bread and potatoes with lard.

Well, maybe it was tidier in your camp, and there were signs everywhere saying what was what – a place for weapons, a place for food – as if you didn’t know where to go or where to sleep.

It’s very strange to live in the ground, or under the ground. For us, everywhere above ground is death’s territory. A bit like how fish can’t live above the water level in their ocean.

Our whole land is like that ocean. The clod of earth I’m looking at right now sparkles with coal in the sun.

The whole of the Earth is gathered together in this clod; our entire planet, from pole to pole.

In the clod, a sun-ray illuminates a grain of sand from the Kalahari Desert, and there I see the barely discernible imprint of an ancient sequoia tree from somewhere in America. Here I see the faint glitter of a tiny African diamond, probably less than a millimetre across. And there, a scarcely visible piece of granite, like those that abound near our home.

Perhaps this clod of earth should have been in your biology class, Solia.

But instead, it landed on my head from the exploding mines our enemies launched at us. And now I have to do something about all this. 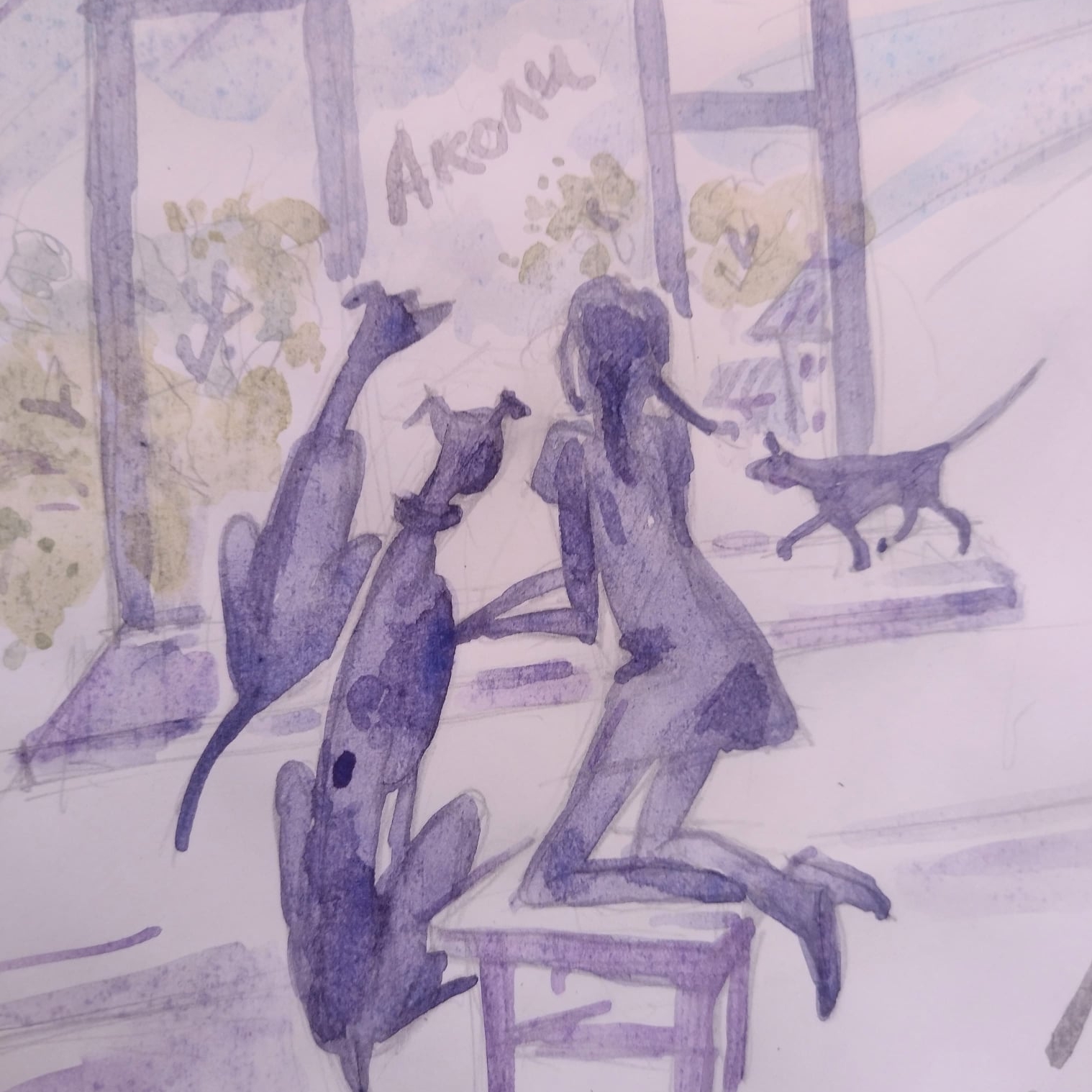 I don’t know why.

Mum was already asleep, as were our cats, Chucha and Bagheera, and our dogs, Yesenin and Doganiai. Even the fish were already hanging motionless in the aquarium. I was the only one who couldn’t get to sleep.

I lay there next to Mum, thinking about all sorts of things.

Sometimes, a shaft of light would glide across the ceiling. I remembered how frightened I was the first time I saw it, and how you comforted me, explaining that it came from cars driving down our quiet street. On the bend, their headlights would shine onto the building and the windows of our flat.

Then I remembered how you came home on leave, and I also couldn’t sleep. But that was different – it was because you were snoring so loudly.

I know you won’t be offended, Dad, because people who are close should tell each other the truth, even if the truth is unpleasant.

Anyway, you were snoring, and at first I tried to wake Mum up, but she was sound asleep, so I decided to turn you onto your side. That’s what granny Olia does when she wants her husband, grandpa Vova, to stop snoring.

But our scary, dark flat was out there, between you and me.

So, I called to you, quietly at first, then louder and louder, thinking maybe it would stop you snoring. But that didn’t really work, so I had to go to you.

I’m your daughter, and you’re my brave Dad, so I decided to be brave, too, and set off down the hallway.

The silence was terrifying, and I thought that, if I sang, it’d make me even braver.

So I started to sing. It was a simple song:

And Chucha is plucky,

Now, off you go to see Daddy!

By the last line, I was already shouting – not very pluckily, though, as I was so afraid. But then the light went on, and out you came, all dishevelled, to see what the noise was, and I immediately felt calm and brave again!

I didn’t notice how I dozed off to such a wonderful memory, and now I’m writing you this letter in the morning.

Do you get frightened there, in the war?

And what does it mean to be brave?

I’m going to let you into a terrible secret, Solia – I get frightened, too.

But it’s no secret, really. Everybody gets frightened.

Fear is a natural thing for us, people.

If we hadn’t been afraid, we’d have been gobbled up long ago by cave bears or sabre-toothed tigers.

Because we’d have gone fearlessly into dark caves and … simply never come out again.

So, if you’re frightened, you pick up a flaming torch in fear, or even a stick. Then the frightened bear will run out of the cave, and you’ll spend the night, cosy and warm.

People invented fire because they were afraid they’d freeze. People explore space because they’re afraid to be alone in the Universe, and they want to find some neighbours.

Fear is what drives us.

When we’re afraid, we only have two options – to do something or not; to go or not; to give it a try, or remain with our fear and never overcome it.

How much of a person a person is depends on how well they overcome their fear.

That’s why, when we’re at war, we’re just fearlessly afraid.

It’s easy to be brave when everyone’s watching.

All you need is to be a bit selfish, take a deep breath, and go for it!

It’s probably like when you go out on stage in your competitions.

Before you go out, you’re terrified. Then breathe in, breathe out, and you’re on the stage. That’s it. You’re already brave.

It’s easier for us, in the war zone, than for you back home.

We know who we need to be brave for.

Think about who you ought to be brave for. And when you’re frightened, just tell yourself:

#imnotafraid. There’s no such thing as fear, or death either.