We are a beautiful, strong european country, and we will have a great future 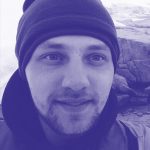 I was talking to my Belarusian friend. The central theme was, of course, the war. They’re there (where, of course, I can not say they rarely see civilian aircraft, it’s almost all completely military now. Sometimes you can see Russian soldiers in the store. He is unhappy that things have hit rock  bottom because Lukashenko has done a sweep in the last year, and, according to him, the Belarus that was being built up in recent years, has disappeared. You can be imprisoned for using the Belarusian language for 2-3 years. Musicians, writers, activists, professors, and artists sit in jail, or already served time, or have emigrated. In cold wards meant for eight people, students and teachers sit together – 20-30 people. I mentioned «The Garden of Gethsemane».

I am very sad because that is in Belarus. But I also understand that this is the consequence of an incomplete revolution. Along with the grief for our brothers, even though Ukraine is the target, yesterday I thought that the war of free Ukrainians against the invaders is a better position to  be in than, in fact, than to be in the condition of the Belarusians, which is on the side of the invaders. My friend from Belarus said that people are not ready to go to war against Ukraine – because how and for what? However, mobilization into the Russian (de facto) army is possible. People like him understand that it is unclear at whom to shoot: Ukrainians or, better yet, themselves, who are going to war.

Apparently, everyone remembers how terrible it was in 2014, there was courage, but there was less understanding of what to do. Now everyone I spoke with is conscious, understands what is happening, but is balanced. It is not just about Lviv. I talked to some relatives and friends from Kharkiv, Zaporizhia, Frankivsk, Kyiv, although I want to support – and hear a few words in response – from everyone. However, communication should also be used sparingly.

In recent years, Ukraine has created a lot of its own things, homegrown and therefore are very valuable for all of us. Someone has become a top-class soldier, someone has started making cool clothes and utensils and exporting them to neighboring friendly countries, someone is making new Ukrainian music that is popular in the world, someone is doing world-class research, and so on. Of course, it is impossible to think about losing it all, so there can be no such thinking.

We are not just a bunch of people, and we are a big, beautiful, strong country in Europe and the world. When we win, we will have a great future. The world has finally seen us, and it will only respect us more. Although the world is different, and we should not be angry with indifferent or pro-Russian countries – what can we learn from them?

The main thing is that we respect ourselves more and more. Because self-doubt still needs to be squeezed out. Now it’s easy to say that it all had to happen because it happened. However, we were at least partially ready for this. The main thing was that our army was ready. A few days ago, more than one of us thought that if russia attacked, we would fight back, but now there is only confirmation of this.

Of course, there are losses in the war, so eternal glory to the defenders of Ukraine and eternal peace to all the innocent victims.

We have something to lose, and that’s good because we’re not going to back down.

Everyone knows what is the best thing for him to do.

Let’s support each other and our army.

Not just with money. Today I saw our soldiers and approached them to thank them.

If you know languages ​​- provide the networks with verified messages in different languages ​​for different social media outlets.

Today I recorded a video for Polish television about the main issues  about the russian attack and the fact that we are breaking their offensive.

It is still necessary to agree with relatives on a meeting place if such a need arises and there is a problem with communications; also under which conditions to take such steps. Gather contacts and locations where you can go if needed.

And, perhaps, one of the main things is: to listen, read, watch the proven official media and resources, to not succumb to provocations and intimidation, because the enemy wants it very much.

If we are not afraid, we will not be intimidated or defeated.

Markiyan Prokhasko. Ukrainian writer, blogger, journalist. He was a participant at Buchach Literary Residency, Ukraine. In 2018, Old Lion Publishing House published his first fiction book ‘The unstoppable power of water’ (Нестримна сила води). The author tries to find out how the ideal city could be. In 2019, Markiyan went to Ukrainian Vernadsky Research Base in Antarctica to write a nonfiction book about the ice continent. In February 2022, he published his book ‘A Dream About Antarctica’ (Мрія про Антарктиду). It is the big story of Antarctica, its nature, law, history, adventure, people, and science. Markiyan is working on his first documentary about Antarctica.