The office of the State Language Protection Commissioner of Ukraine has recorded more than 100 cases of linguicide in temporarily occupied territories since the start of the full-scale Russian aggression. The findings were presented on the website of the language ombudsman.

Acts of linguicide are accompanied by threats, intimidation, use of physical force, psychological pressure, restriction of liberty, kidnapping, tortures, murders and other crimes against the citizens of Ukraine.

Acts of linguicide by the Russian occupiers include: shelling of Ukrainian television towers, switching off or seizing of Ukrainian TV channels and radio stations, kidnapping and murders of journalists. Such incidents were recorded in the occupied cities of the Zaporizhzhia and Kherson regions: Melitopol’, Berdiansk, Enerhodar, Nova Kakhovka, Tavriisk, Kherson and Kakhovka. 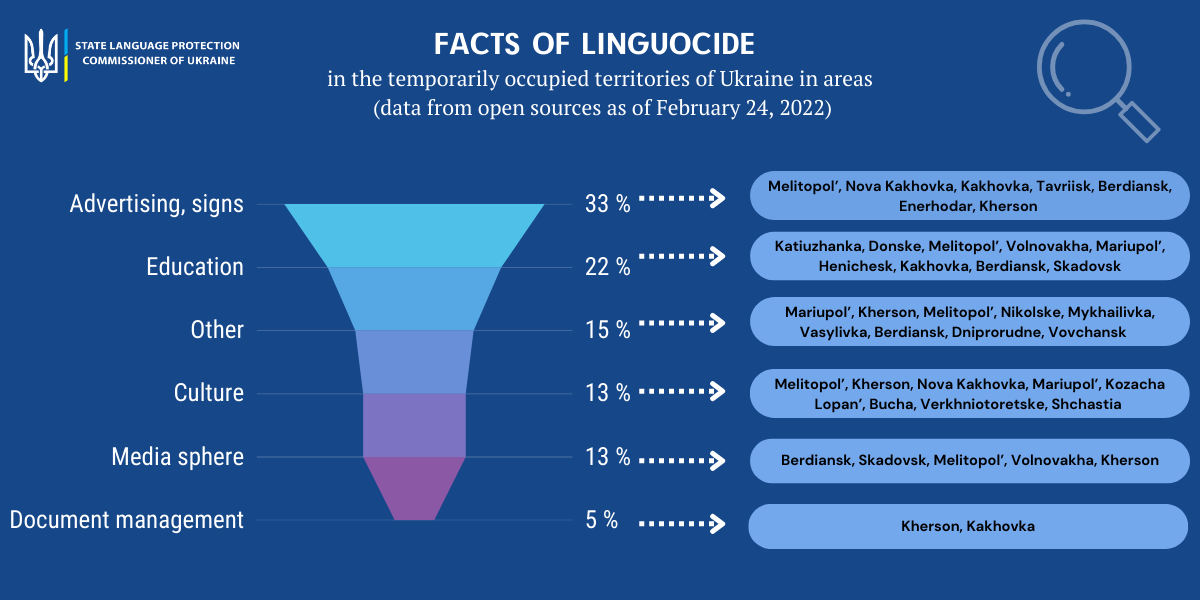 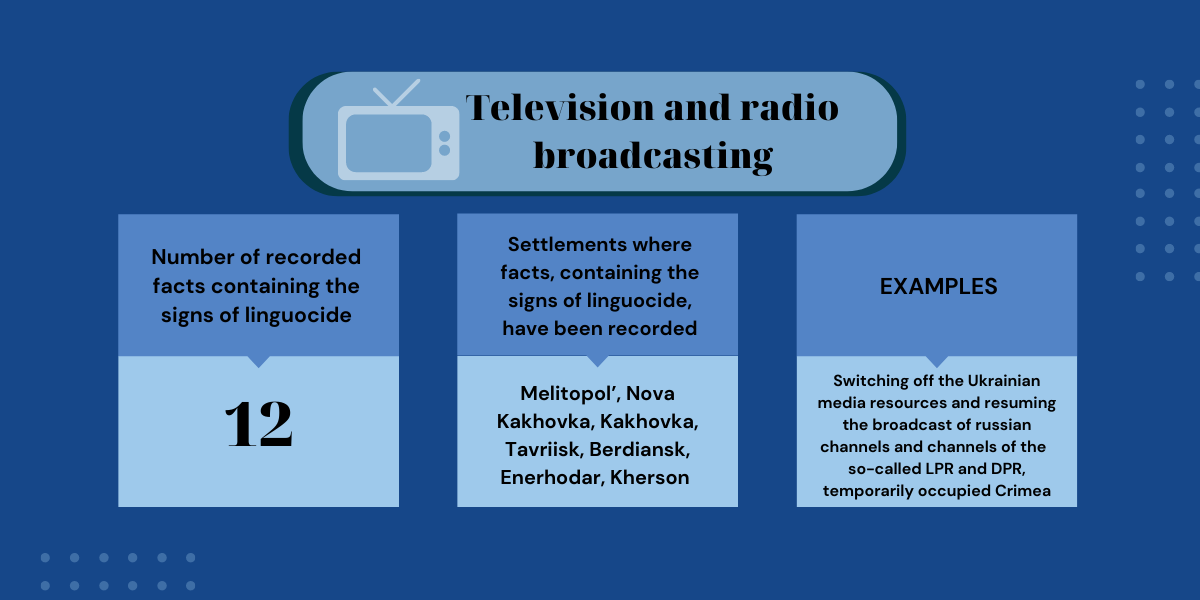 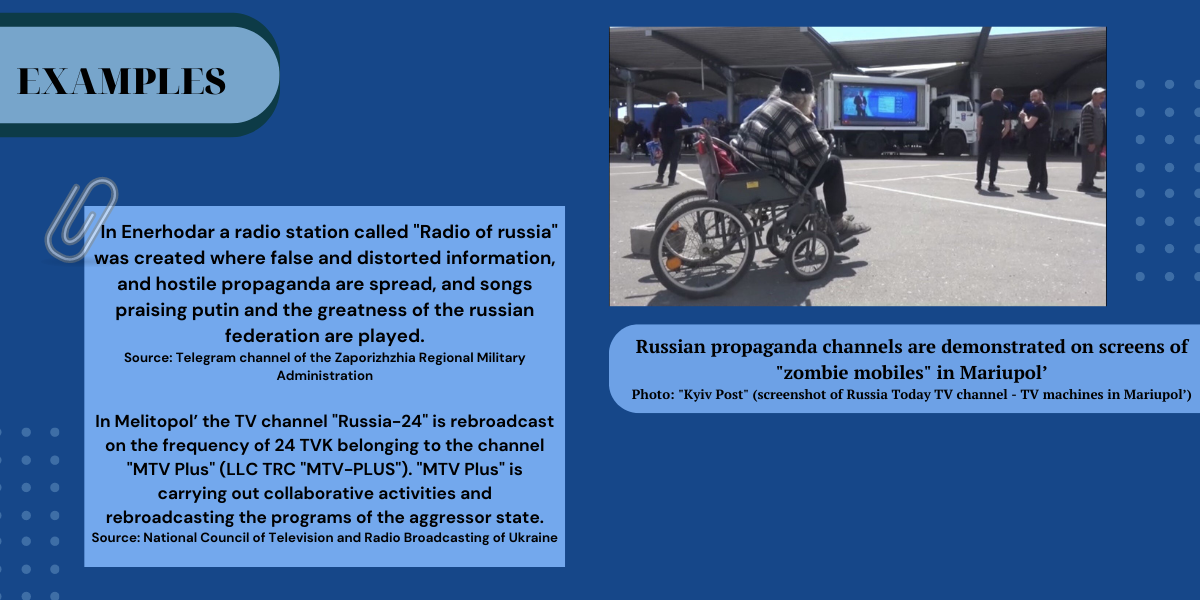 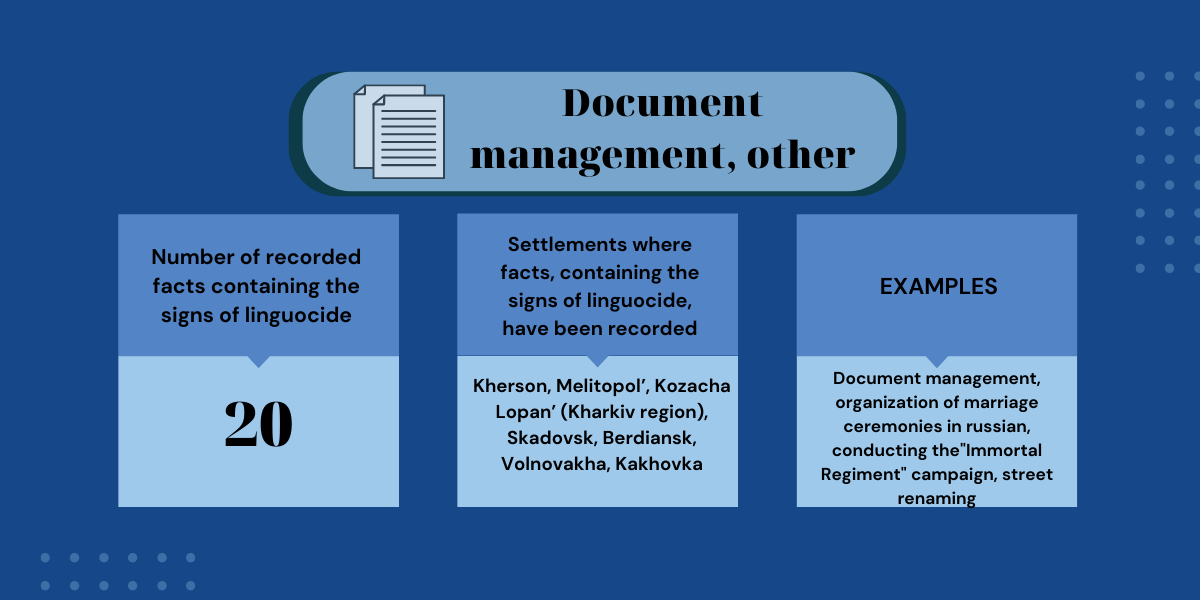 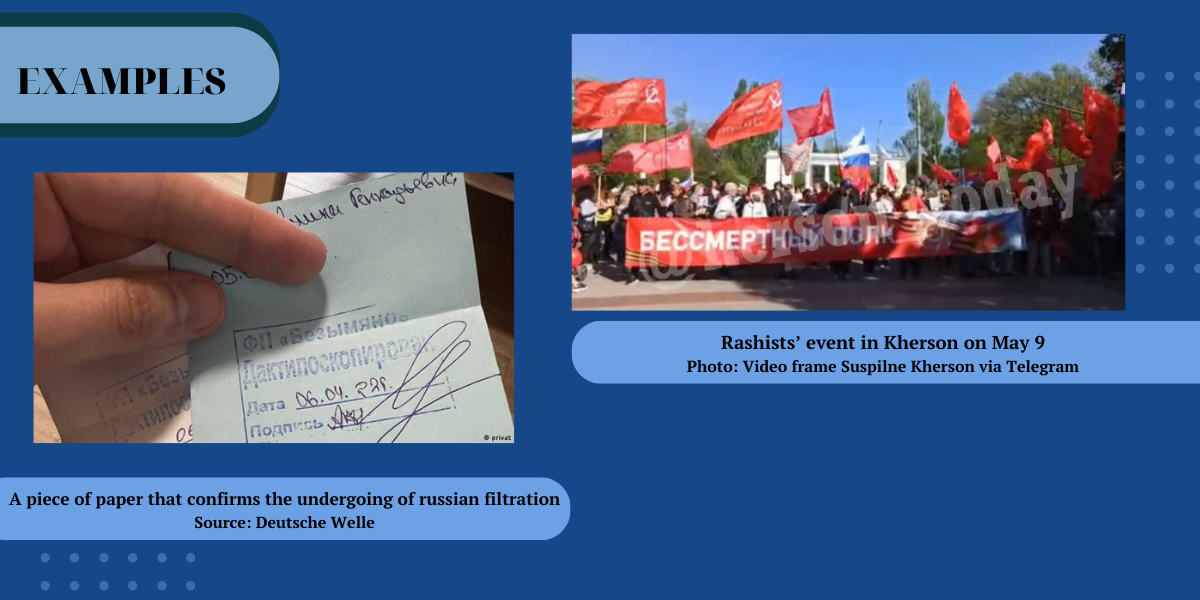 Numerous incidents containing signs of linguicide have been recorded in the sphere of culture: Ukrainian-language books are removed from libraries in the temporarily occupied territories and and burned. In the occupied settlements of the Donetsk, Luhansk, Kherson, Zaporizhzhia, Kyiv and Kharkiv regions (Melitopol’, Kherson, Nova Kakhovka, Mariupol’, Kozacha Lopan’ (Kharkiv region), Bucha, Verkhniotoretske, Shchastia) there have been numerous cases of cultural events held in russian, newspapers are published and distributed in russian. 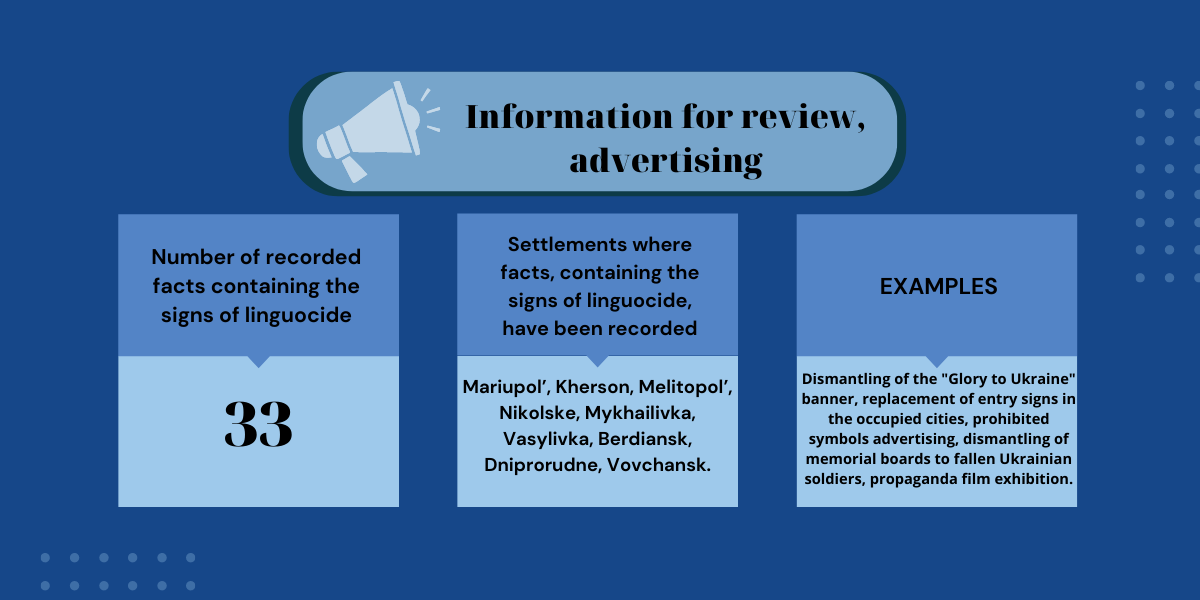 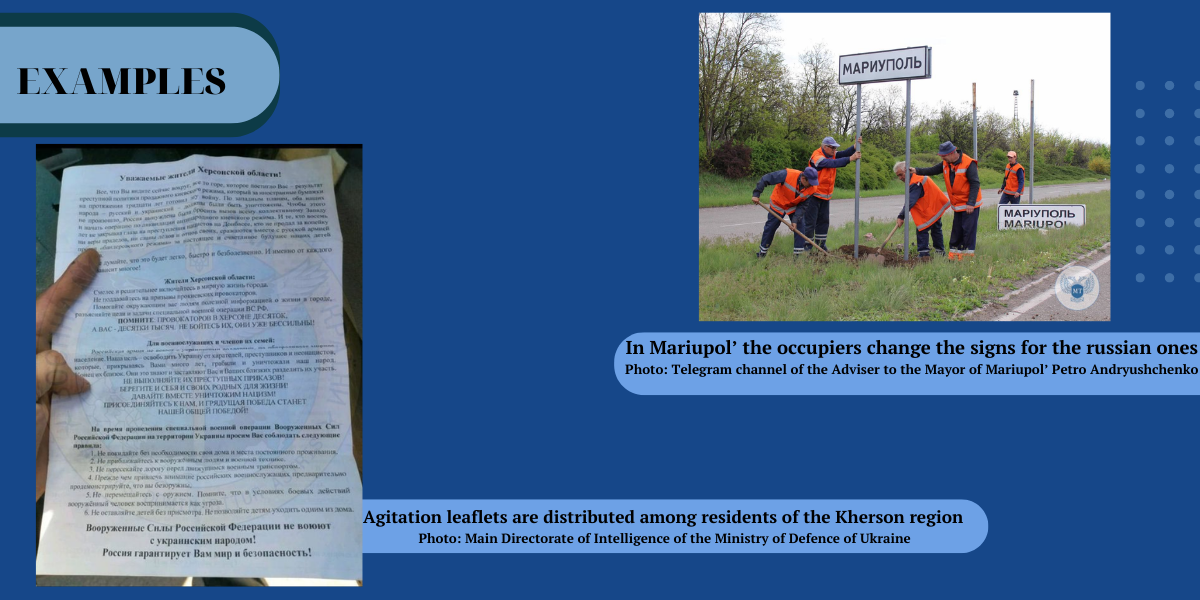 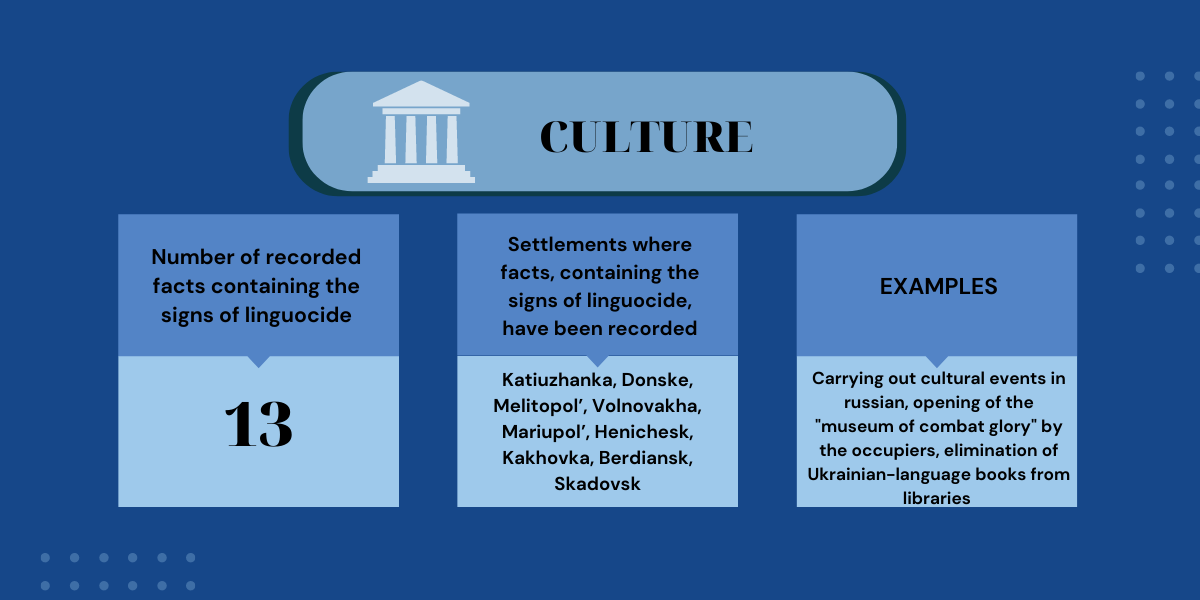 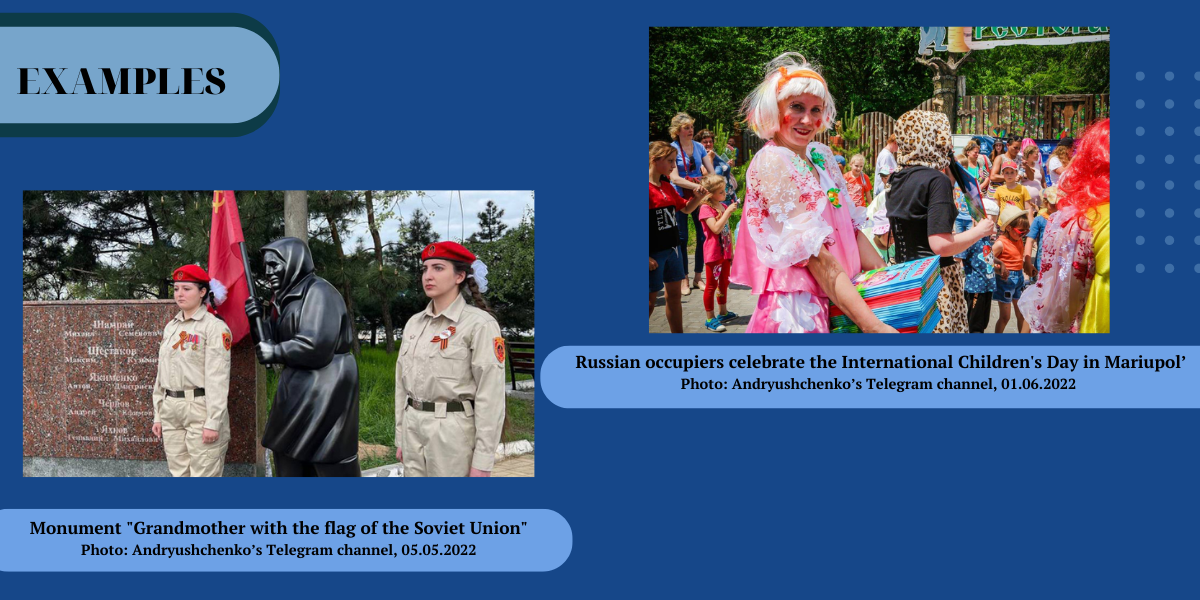 General secondary education institutions are being switched to russian language of study and russian educational programs, school directors are being dismissed for refusing to work with the occupiers and forced to declare “loyalty to Russia,” history textbooks are being replaced, positions of “political instructors” at schools are being introduced. Such crimes have been recorded in Katiuzhanka, Donske, Melitopol’, Volnovakha, Mariupol’, Henichesk, Kakhovka, Berdiansk and Skadovsk. In Mariupol’ occupied by the russian federation the occupiers started creating a branch of the paramilitary organization “Young Army”. 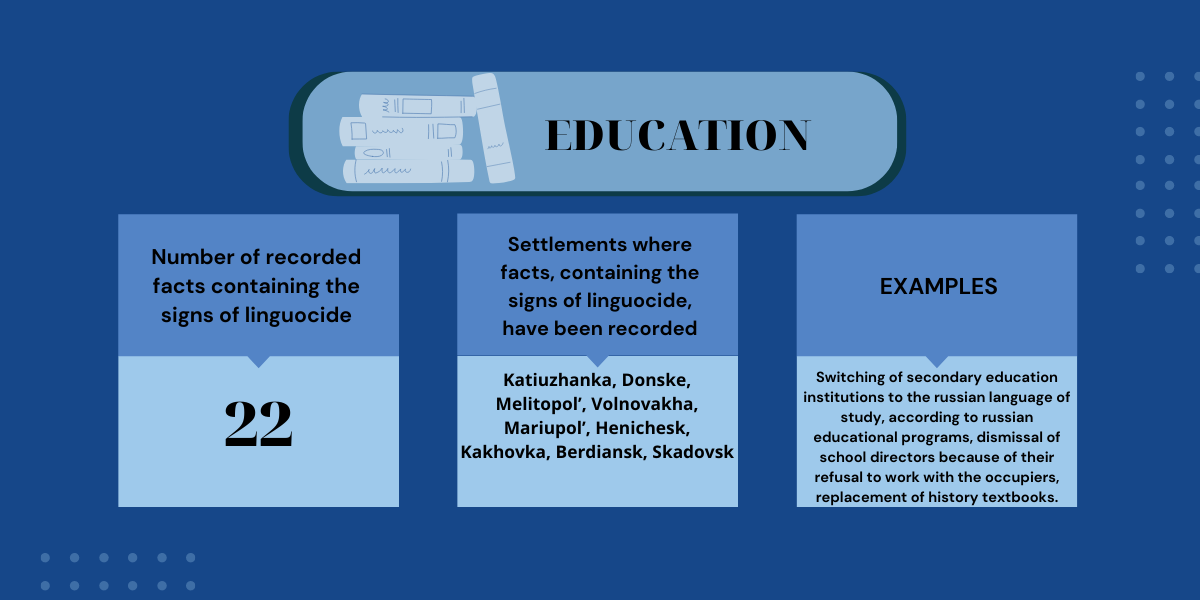 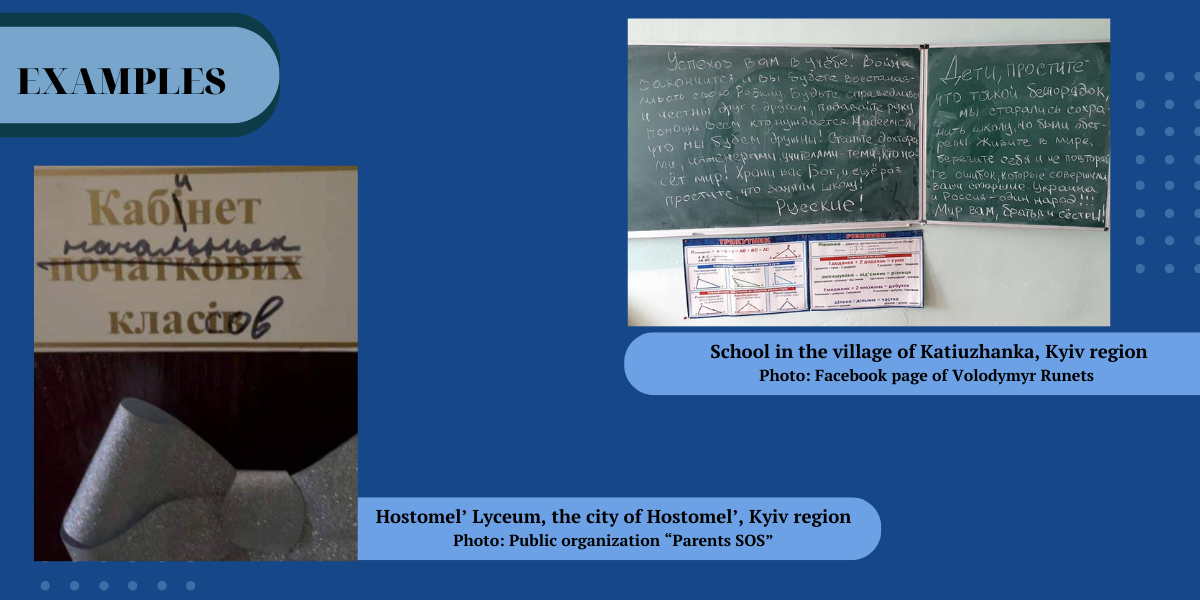 The russian language in the temporarily occupied territory is becoming the language of acts, work, business correspondence, documentation, etc.

According to the language ombudsman, this could be part of a planned policy of assimilation by the occupation regime.

Any acts by the occupiers or collaborators involving the discrimination or repression of Ukrainians based on language can be reported by phone: +380635561279 or email: stoplinguacide@gmail.com.

“The recorded facts do not pretend to be comprehensive, they are a certain generalization, but they provide an opportunity to characterize the range and methods used by the occupiers in their attempts to overthrow the constitutional order, to destroy the Ukrainian statehood and identity in general,” the office says.