The two assaults on the Slovo writers’ house in Kharkiv 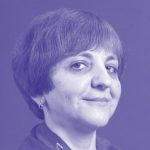 During the mass bombing of Kharkiv, a city of over a million people close to the border with Russia, the ‘Slovo’ writers’ house was badly damaged. The house is a significant building in Kharkiv, associated with the renaissance of the Ukrainian arts scene in the 1920s.

It was the second time in the building’s history that it had come under attack. In 1933-1938 Soviet Russia sent officers from its secret service, the NKVD, to arrest and kill dozens of its residents, Ukraine’s creative elite. In the years since Ukraine’s independence in 1991, the house has become an important point on Kharkiv’s cultural map: before Russia’s invasion it had hosted literary events and writers’ residencies, and hosted dozens of Ukrainian cultural figures, including the writers Serhiy Zhadan, Oksana Zabuzhko, Lyuba Yakimchuk and Lyubko Deresh, the literary researcher Yaryna Tsymbal, and the translator Tetyana Rodionova.

In 1917 the Ukrainian state was not able to withstand the onslaught from Russian weapons. But the resistance the nation showed allowed Ukraine to become part of the Soviet Union in 1922 on equal terms with the other founding republics. At least, that is what was written in the union treaty that was signed by the republics at the time.

The Soviet authorities moved their capital from Kyiv to Kharkiv, and the city became a well-known literary centre. Some very interesting constructivist buildings were built, one of which was the Slovo writers’ house. It was designed in the shape of the letter ‘C’ ‒ this is the first letter of the Ukrainian word слово (slovo), which means ‘word’. The house’s symbolic shape is especially noticeable on photographs taken from above. On the building’s facades are memorial plaques with the names of dozens of illustrious Ukrainian cultural figures.

In the 1920s the government initiated a policy of ‘Ukrainianisation’, attempting to free the state from Russian imperial domination. Government and parliamentary newspapers were published in the Ukrainian language, as well as dozens of cultural and literary journals. The book publishing market developed quickly.

The Slovo house was built especially for writers. The street on which it is located was named Chervonykh Pis’mennykiv – ‘Red (Soviet) Writers’. At a time when most Ukrainians were living in communal houses with shared kitchens, the residents of Slovo were afforded a fantastic level of comfort, with private apartments, showers and central heating. There was even a solarium on the roof, where children would go to sunbathe.

The older generations, meanwhile, were treated to the era’s latest technologies. The first radios appeared in the house. Those who didn’t own one themselves went to their neighbours to listen to theirs. 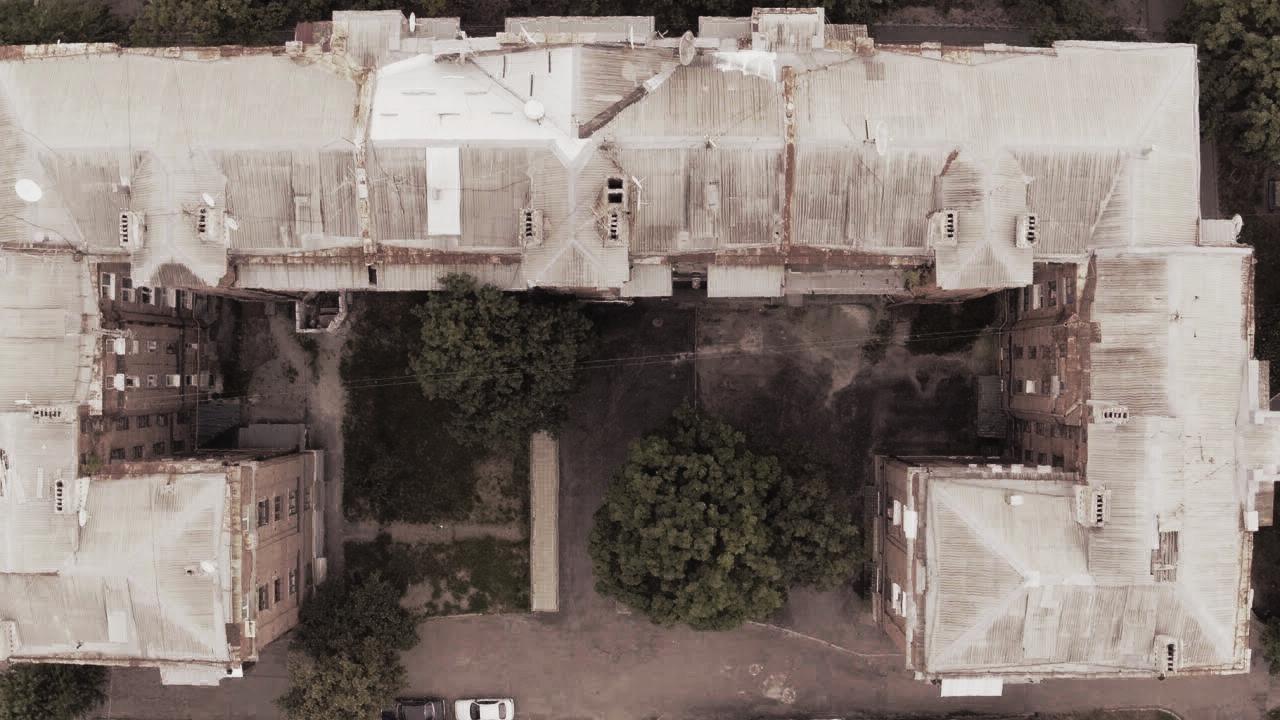 For some, a typewriter was also a source of comfort and pride. The American make Smith and the Erika, produced in Germany, were popular. Others preferred a portable Remington ‒ which could be carried around in a leather case ‒ or the reliable Underwood. Telephones were installed in all the apartments, although it wasn’t clear whether this was for the benefit of residents, or for the special services, who habitually listened in on their calls. Friendly telephone conversations between writers were often discussed with investigators soon after…

Despite the mod cons, the Slovo house wasn’t an inspiring atmosphere in which to write. From 1930 onwards Soviet totalitarianism became more oppressive. Writers were suffocated with censorship, and were often accosted by the NKVD, either to be interrogated, or recruited.

Ukrainian writers could fall foul of the Soviet powers in myriad ways. They may have fought under the “incorrect” (that is to say not the Soviet red, but the Ukrainian yellow and blue) flag. Or they may have written too pessimistically about the post-revolutionary reality, instead of glorifying it. Others may have shown an admiration for European culture, and a lack of fondness for Moscow, which in the opinion of their masters was harmful and unacceptable. 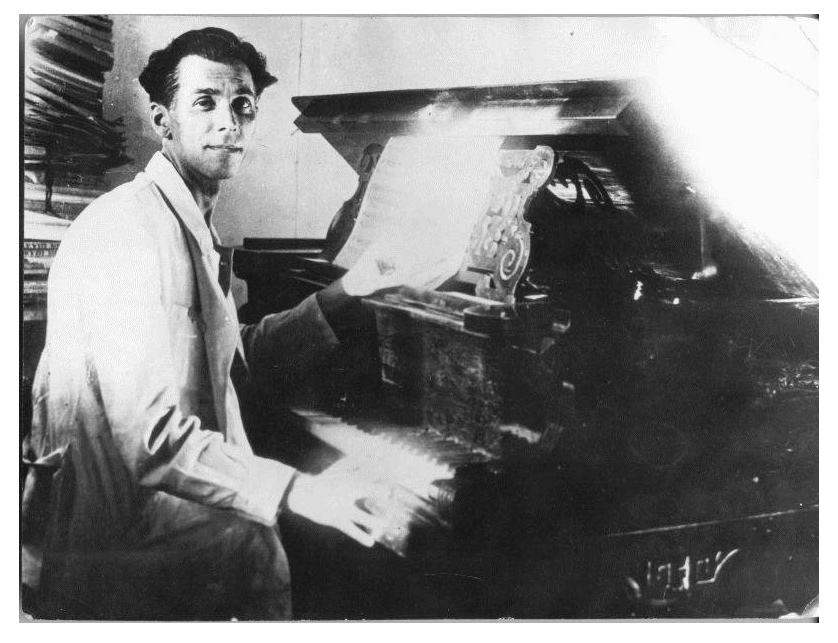 The issue of Ukraine’s cultural (and ultimately political) orientation – should it look to the West or to Russia? – was discussed passionately at the end of the 1920s, during a celebrated literary debate that was forcibly quelled by the authorities. This debate was an attempt to uphold Ukraine’s cultural sovereignty, and reject and deny Moscow’s designs on imperialism. Next to no-one supported the pro-Russian movement in Ukraine. Having understood that they had lost the ideological battle, the Bolshevik authorities began mass repressions against everyone who had taken part in the debate.

Ukrainian theatre made huge strides forward in the 1910s.

A one-time resident of the Slovo house was the director Les Kurbas, the founder of the Berezil modern theatre. Appealing to the expressionist style, his neighbour, the leading playwright Mykola Kulish, experimented with the form. In 1933, when Russia unleashed the Holodomor famine in Ukraine, which caused an estimated 3.9 million deaths and the loss of 600,000 unborn children, Kulish wrote the absurdist drama ‘Maklena Grasa’. Absurdism became the only way that Ukrainian writers could adequately express these catastrophic actions and events, not only in Ukraine, but across the whole of Europe. These were the years just before Adolf Hitler came to power. 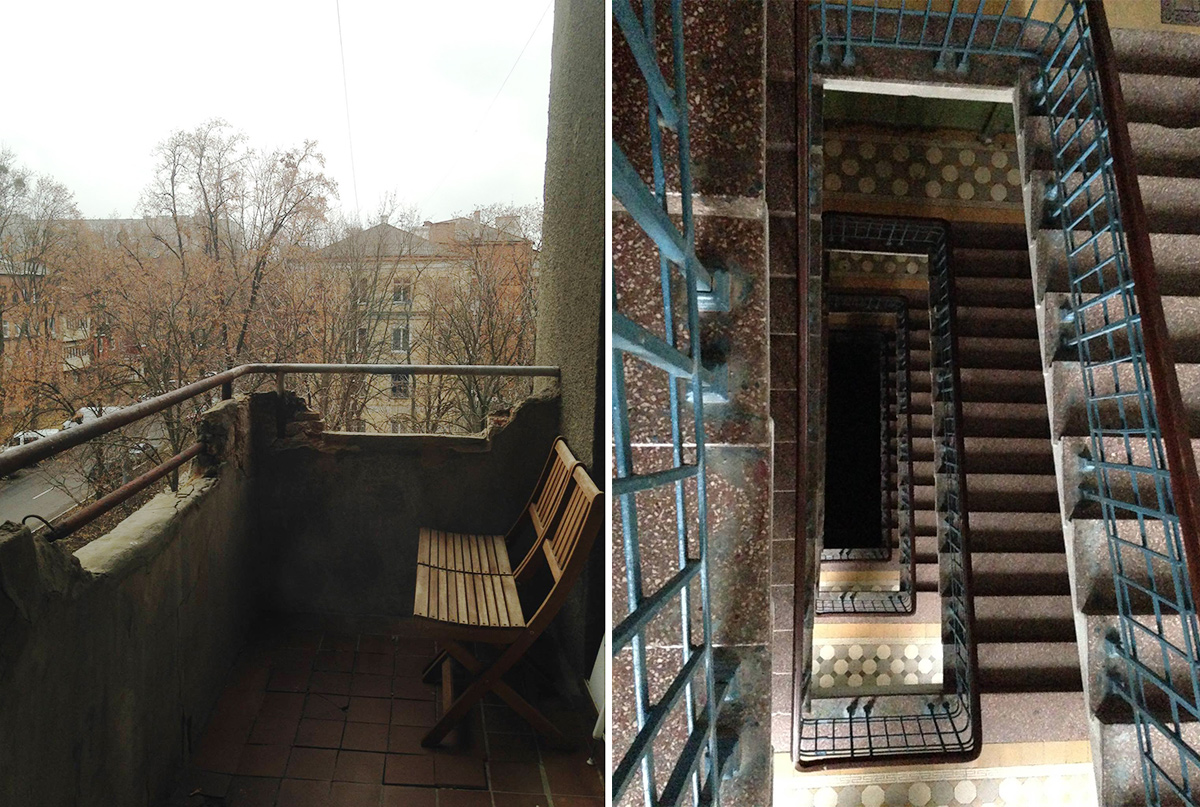 In the spring of 1933 residents of the Slovo house began to be arrested, on completely fabricated charges of plotting to assassinate the Soviet leaders.

Another who lived in the building was the writer Mykola Khvylovy, who was the unofficial leader of this generation of Ukrainian writers. In a series of articles printed by the leading publications of the time, Khvylovy presented a manifesto for Ukraine’s political and cultural orientation, stressing the need to overcome the nation’s dependence on its colonists. Khvylovy’s resistance against the Soviet system was given momentum by his followers, and became so powerful that Stalin himself became involved. In 1926 he wrote a special letter to the Ukrainian government, with an order to silence Khvylovy.

One sunny Sunday morning, on 13 May 1933, Khvylovy’s friends and neighbours in the Slovo house heard a gunshot. The writer had shot himself.

The people of Kharkiv began to call the building the ‘crematorium’. Night after night black NKVD cars would pull up outside the house, to carry away their latest victims.

One story of a wrongful arrest almost beggars belief. On 4 November 1934, on the eve of the anniversary of the Bolshevik revolution, members of Stalin’s NKVD went up to the fourth floor of the Slovo house in search of the playwright Vasyl Minko. But he was not there: one version of the story goes that he was warned of his arrest and fled to the outskirts of Moscow. But an arrest still had to be made. Instead of taking Minko, the officers went down to the third floor, to the apartment of another Vasyl – a young and talented lyricist named Vasyl Mysyk, who had nothing to do with politics.

When ordered to come with the officers, Mysyk asked them to show an arrest warrant. There he saw the name of his neighbour, Minko. But while this discrepancy didn’t spare Mysyk, the tick on the NKVD’s list saved Minko’s life.

Poor Vasyl Mysyk, without admitting any guilt or signing any confession, escaped the worst fate. He served his five-year term, returned to Kharkiv, and kept a low profile for the rest of his life, trying not to attract the attention of the authorities. Vasyl Minko always tried to help his involuntary rescuer, feeling the burden of his own guilt. 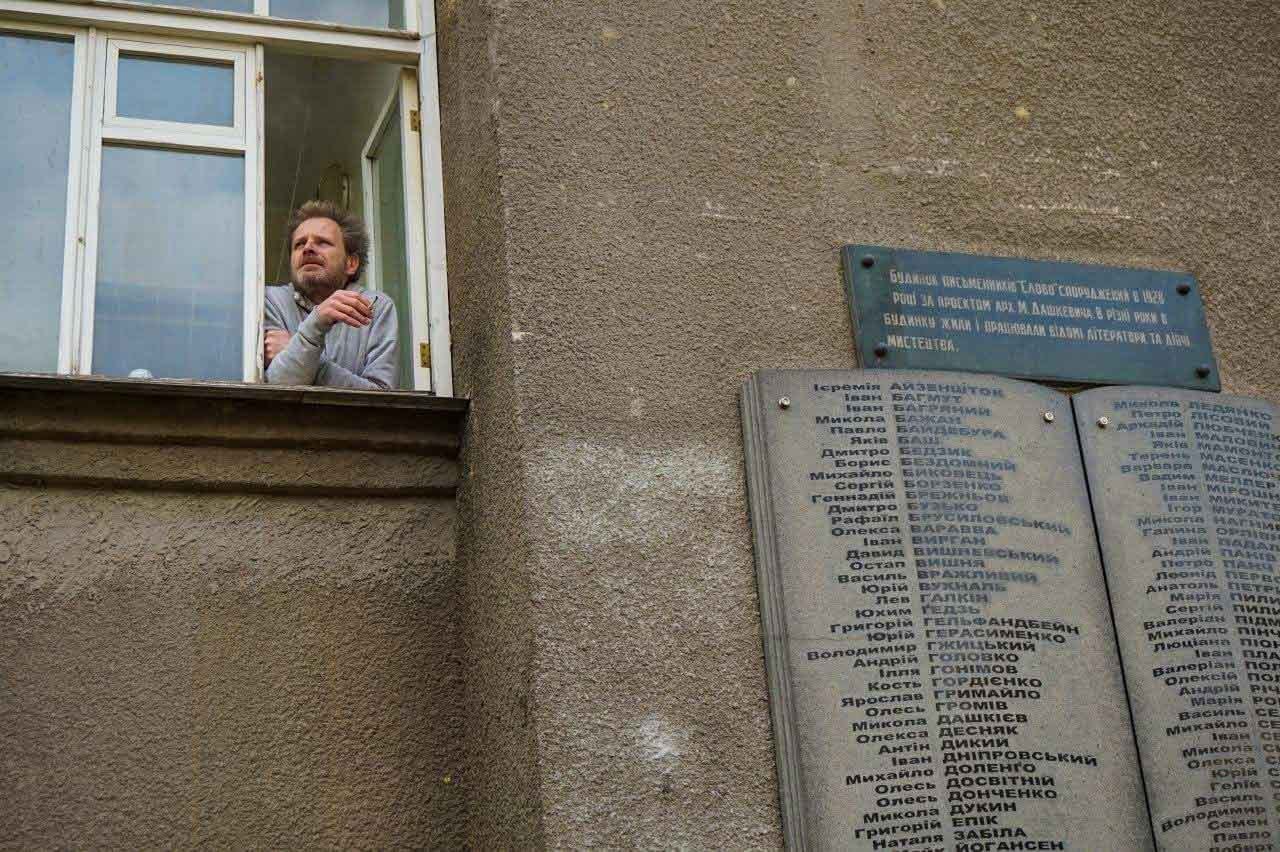 Between 1933 and 1938, almost all of the residents who had settled in the newly-built Slovo house in the late 1920s were taken away.

After the collapse of the Soviet Union, an incredible amount was done in Ukraine to restore the national memory. Once-forbidden names and manuscripts were resurrected; trampled graves were restored. In Kharkiv, the grave of Mykola Khvylovy had disappeared when a park was built in the cemetery. But in 1991, five families joined forces to find it, using information passed down from generation to generation.

To destroy the Slovo building is to deprive us of an important part of the collective memory of our resistance against the Soviet empire, and of the identity of our literature.

We know what we are fighting for. We remember the victims. We know what the Russian occupiers have already done on our lands. We must win.