Cultural Disaster: What Ukrainian Sites Were Destroyed by Russian Occupants

Dozens of cultural sites have been destroyed in the weeks of Russia’s invasion of Ukraine. Among them is a museum of a Ukrainian naive artist, the plane from the Guinness Book of World Records, cathedrals, theatres, schools, and many other architectural monuments. Dozens of civilians are dying under the rubble as civic activists and artists call on NATO to close the skies over Ukraine.

Since the full-scale escalation of Russia in Ukraine, cultural monuments and residential areas of Kharkiv, Kyiv, Kherson, Mariupol, Zhytomyr and a number of other cities and towns have been significantly destroyed.

«Hundreds of innocent victims, the total destruction of churches, cathedrals, and museums – is the price of the still opened sky over Ukraine. Ordinary Ukrainians stop Russian tanks with their bare hands, our army successfully defeats the occupiers in all directions. But Russian missiles and planes vilely and dishonestly continue to bomb our beautiful, peaceful cities. The world must stop this. We are the government officials, together with the deputies, actively calling for this. Every Ukrainian calls for this. Close the sky over Ukraine!», – said the Minister of Culture and Information Policy of Ukraine, Oleksandr Tkachenko.

Here are the main affected cultural monuments of Ukraine as of March 23 (updated). 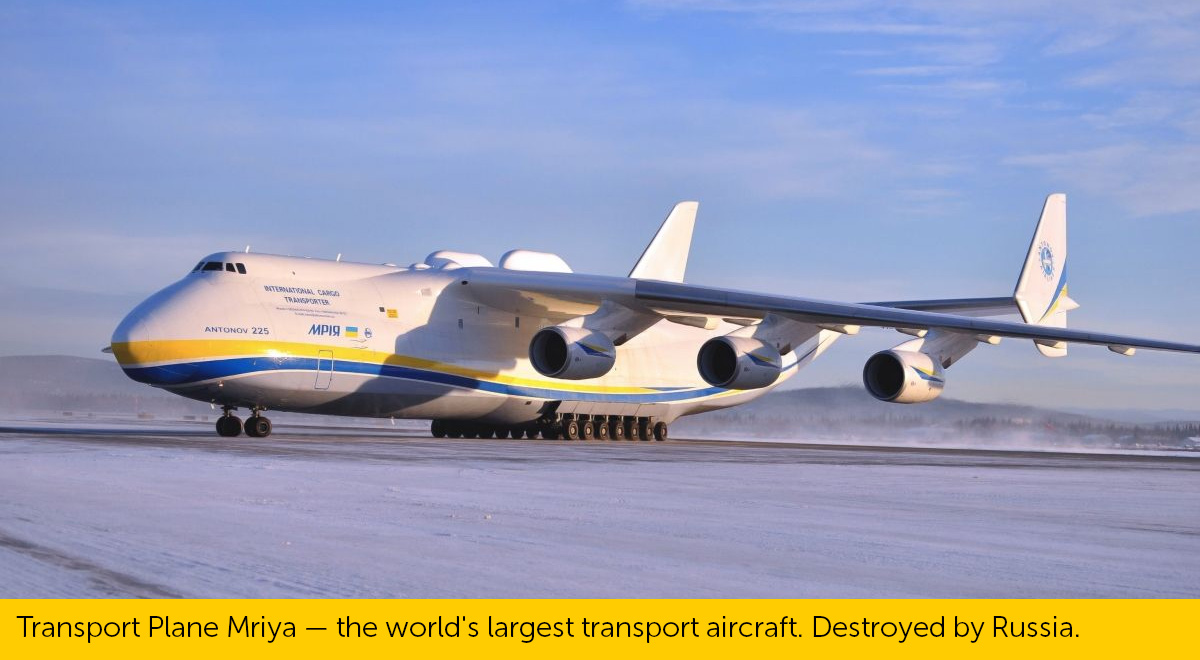 As a result of a Russian airstrike on Gostomel airport, the world’s largest and most powerful transport aircraft, the «Mriya», was destroyed.

AN-225 «Mriya» is the largest and most powerful transport aircraft in the world, created by the Antonov Design Bureau in Kyiv. Its maximum take-off weight is 381 tons. This is the world’s biggest plane that took off more than once. In 2004, Fédération aéronautique internationale entered the An-225 in the Guinness Book of Records for its 240 records. 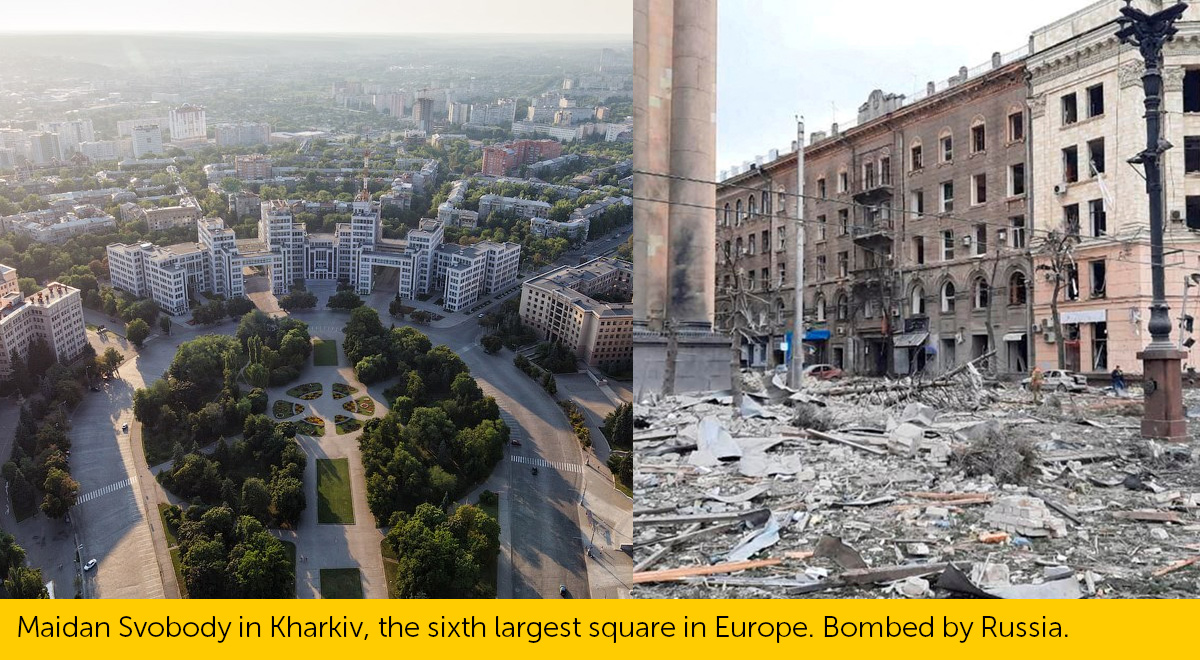 Freedom Square in Kharkiv was bombed. Two shells fell near the Kharkiv Regional Administration building. The building itself is still intact (as of 4.03).

Maidan Svobody is the central square of Kharkiv, the sixth largest in Europe and the twelfth largest in the world. The architecture of modern Kharkiv is eclectic, combining buildings of the XIX century; monuments of constructivism, cooperative houses, and new buildings. During the Second World War, the city was almost completely destroyed, so most of the existing architectural solutions were created after the 50s.

President Volodymyr Zelensky calls what is happening in Kharkiv a war crime. «After that, Russia is a terrorist state. Obviously, it should be official. We call on all countries of the world to respond immediately and effectively to this criminal tactic of the aggressor and to declare that Russia is committing state terrorism. We demand full responsibility for terrorists in international courts. Kharkiv and Kyiv are important targets for Russia now. Terror aimed at breaking us, our resistance», – said Zelensky.

Also, as of 4.03,  the St. Anthony’s Church, and the Church of Myrrhophores were severely damaged in Kharkiv.

On February 27, the Lyzohubs’ Estate in the Chernihiv region was occupied by Russian occupation troops. They are currently looting and smashing the building. Before that, a shell flew into the park.

The  Lyzohubs’ Estate is a museum estate, a monument of national importance. Lyzohubs were a noble Cossack family, known since the second half of the 17th century.

The museum of Ukrainian artist Maria Prymachenko in the village of Ivankiv, near Kyiv, was destroyed. Fortunately, at the time of the disaster, most of the collection was on display in Kyiv. Part of the collection from the burning museum was saved by residents of the village of Ivankiv. Maria Prymachenko (1908–1997) – Ukrainian folk artist in the genre of «naive art»; laureate of the National Prize of Ukraine, named after T.G. Shevchenko. She was born and buried in the village of Bolotnya of the Vyshhorod district of the Kyiv region. The year 2009 was recognized as the year of Maria Prymachenko by UNESCO. Pablo Picasso and other artists were fascinated by the artist’s work. The artist did not have specialized education, was not involved in «official art circles» and did not have the benefits and awards of the «Soviet artist».

Russian invaders looted the only castle building in the  Zaporizhia region – the museum-reserve Sadyba Popova (Popov’s Estate). The palace was built in 1894, it resembled the architecture of medieval European castles. This is a monument of national importance. The blast shattered glass in most windows. According to museum officials, the exhibits were not damaged. All art objects are now moved to safer places. However, a sudden change in temperature and humidity could have a negative effect on their condition, reports the museum’s representatives.

Kharkiv Fine Arts Museum – is one of the largest museums in Ukraine, has a significant collection of works of fine and decorative arts of Ukraine, Russia, and Western countries. The 19th-century building of the museum was built in the Classicist style, with elements of Baroque and Art Nouveau.

The building of the Vasyl Tarnovsky Museum of Ukrainian Antiquities came under fire from the Russian military. According to Serhiy Laevsky, director of the Chernihiv Historical Museum, the building survived Bolshevik shelling in 1918 and 1919, as well as bombing by the German occupiers during World War II.

The museum building was built in the late nineteenth century. in the historicism style. The Chernihiv Regional Library for Youth has also been located in this building for the last 50 years.

Museum of History and Local Lore in Okhtyrka

The blast caused significant damage to the building.

In total, the Museum Fund had about 2 000 exhibits, including decorative and applied arts, graphics and sculpture, paitings by Kuidzi, Aivazovsky, Yablonska and many others.

The building was heavily bombed and almost destroyed, but people, who were hiding under the theatre, in the shelter, survived.

According to the Italian Minister of Culture, Italy is ready to restore the drama theater in Mariupol, destroyed by the Russian occupiers.

As of 18.03, 280 schools are heavily damaged or destroyed, The Mykhailo Boichuk Kyiv State Academy of Decorative and Applied Arts and Design. Moreover, the building of the Faculty of Economics of Karazin University, the educational buildings of the Kharkiv National University of Arts are fired by the Russian troops.

Read more: Since the beginning of the war, Russia has bombed and shelled more than 280 schools in Ukraine

According to the State Service for Ethnopolitics and Freedom of Conscience, 28 buildings of spiritual significance in 8 regions were damaged or destroyed by the Russian occupiers. 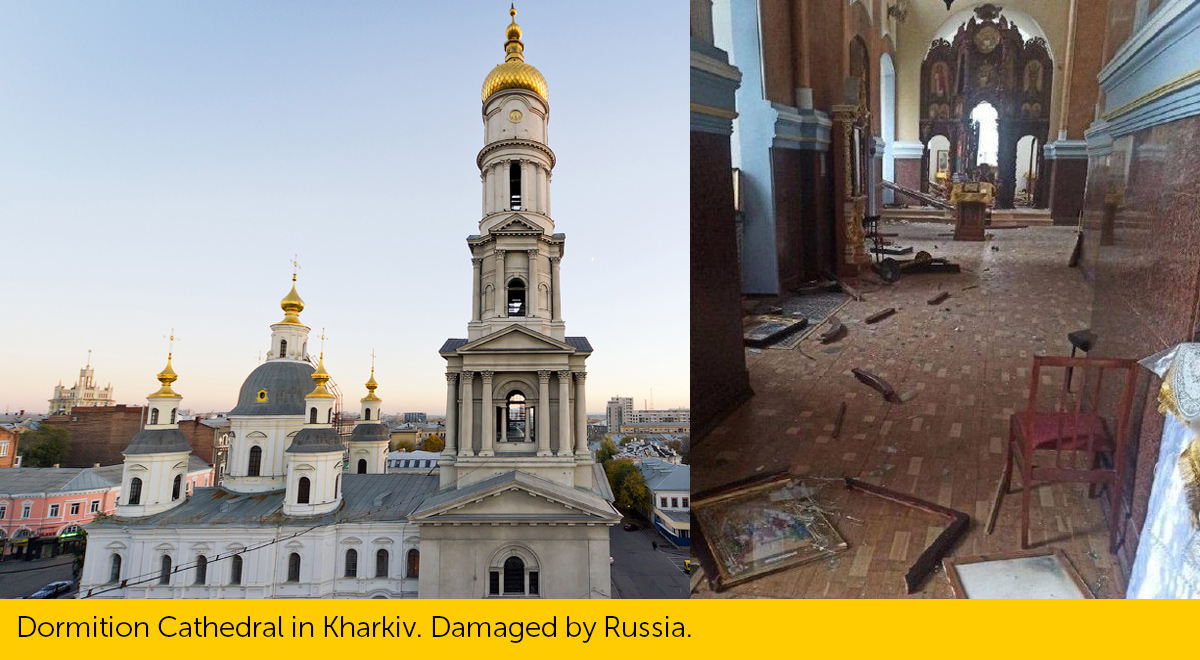 In the Donetsk region: the Svyatogorsk Lavra, the church of the PCU in the town of Volnovakha, the Holy Dormition Monastery, the church in honor of the Nativity of the Blessed Virgin, and the Constantine Mosque were partially destroyed or damaged.

In the Luhansk region: Christ-Christmas Cathedral, St. Catherine’s Church, the Second Church of St. Mitrophan and Sunday school in Lysychansk.

Kharkiv region: Church of the Holy Faithful Queen Tamara, Synagogue of the United Jewish Community of Ukraine, Church of the Holy Myrrh-bearing Women, Assumption Cathedral, Anthony’s University Church, Curia of the Kharkiv-Zaporizhzhya Diocese of the Roman Catholic Church in Ukraine. In the Zaporozhye region: the church in honor of St. Tikhon in the city of Huliaipole. 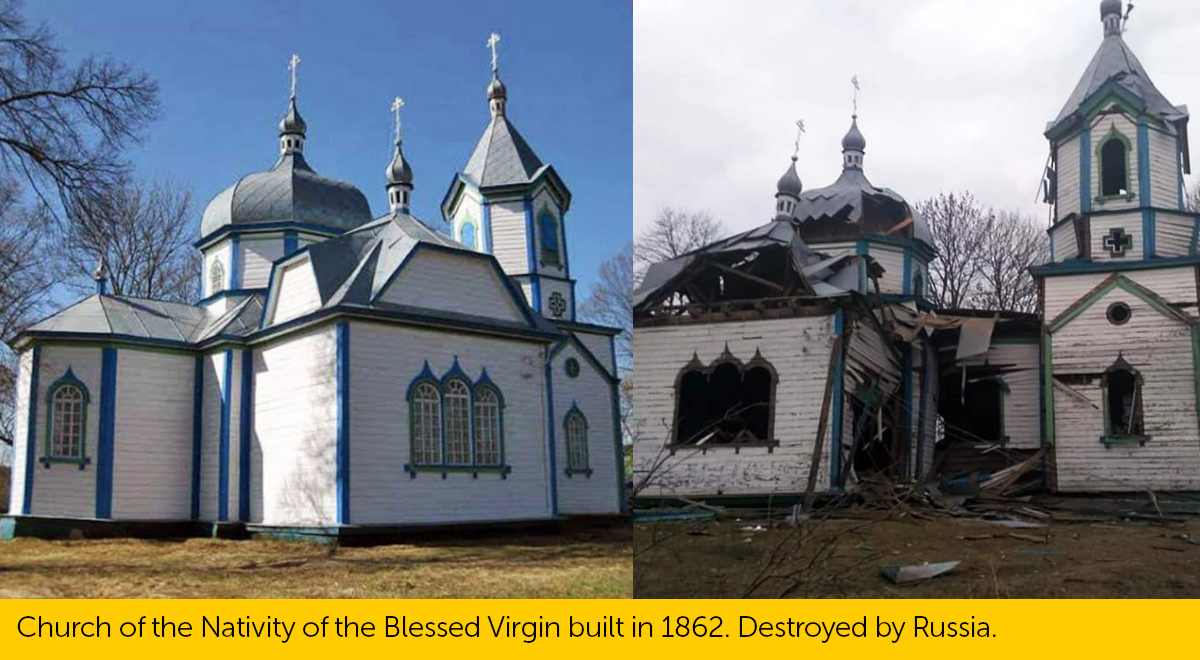 In addition, there are reports of the threat of destruction of St. Sophia Cathedral in Kyiv, a key architectural monument of Kievan Rus, built in the 11th century. It was in this cathedral that the first library in Ukraine was established – the library of Prince Yaroslav the Wise of Kyivan Rus, and chronicles were also actively kept there. The cathedral is a UNESCO World Heritage Site. 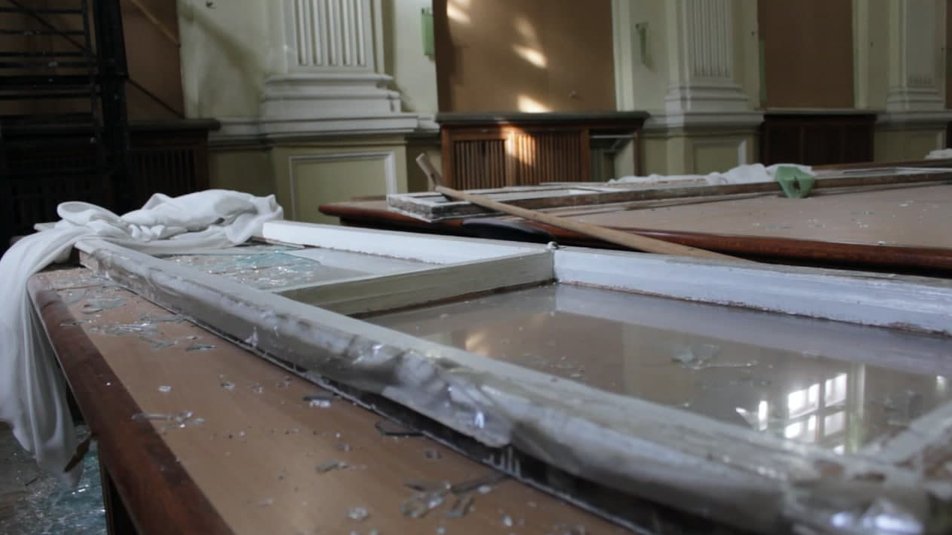 Read more: The bombing of Kharkiv damaged one of Europe’s largest libraries

As previously reported, calls to close the skies over Ukraine were published by cultural figures and artists on their personal pages on social networks.

The closed sky will significantly reduce the risks of Russian missiles hitting Ukrainian strategic facilities and settlements with civilians, which will reduce losses among both the Armed Forces and civilians. It will also facilitate the struggle of the Ukrainian army.

You can join the requests to close the sky by using the hashtags #CloseTheSky and #NoFlyZone. It is still possible to sign a petition to NATO, which has already received more than a million votes. 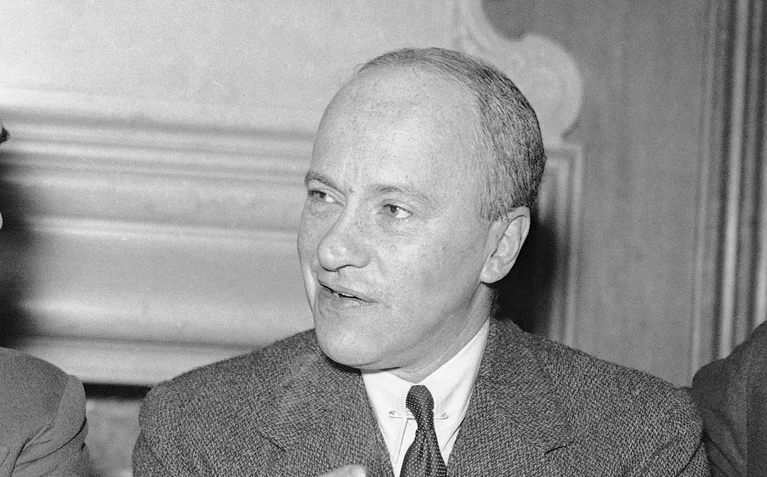