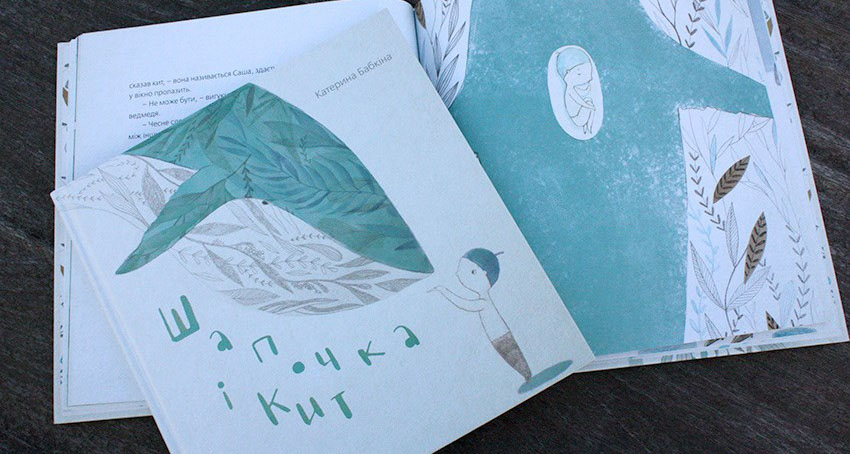 Kateryna Babkina’s children’s book Cappy and the Whale will be published by Penguin Random House, the author announced on Facebook.

This is the first English translation of the Ukrainian book. Translator Hanna Leliv worked on it for more than three years.

Kateryna Babkina shared the details with Chytomo: “The negotiations lasted a long time and the joint work on the translation by me, Hanna Leliv and the PRH editors took even longer because we wanted it to be as close to the original as possible.”

The original illustrations will also be used in the book: “It’s also nice that they decided not only to publish the translation it is own style but to reprint it with Julia Pilipchatina’s work because I consider these drawings an equal and full part of the book – they mean a lot to me. However, this added another party to the negotiations because The Old Lion Publishing House owns the rights to the illustrations and the design.”

The book will come out in October 2022. Regarding her work with the publishers, the author added: “There are nuances to working with such a large publisher. It takes very long, it’s very thorough, there are lots of emails. There was a good advance on the royalties, everyone works very professionally, very meticulously. And from a purely human perspective, when the war started there was a lot of support from the people I’m working with.”

The publishing house will donate 5,000 pounds plus any profits from the sale of the books to the National Literacy Trust to help Ukrainian refugee children.

“It was the publishing house’s initiative to donate 5k pounds + the proceeds, but I think this is due to the history of the original Ukrainian book: from the beginning, part of the proceeds went to the Tabletochki Charity Foundation and the book became the basis for the charitable campaign Cappy and a Million for Tabletochki. I tell everyone this as soon as discussions about rights begins. I wanted this to be a Ukrainian foundation like Tabletochki, but it wasn’t possible: Penguin Random House can’t legally donate from book sales to a non-British foundation,” Kateryna explains.

Cappy and the Whale in Ukrainian was published in 2015 by The Old Lion Publishing House. It is about children with cancer.

Kateryna Babkina’s novel Sonia was published in Polish in 2018.

She was awarded the ANGELUS Central European Literature Award in 2021