More and more famous writers are terminating their contracts with russia

Writers from all over the world express support for Ukraine and cancel book contracts with russia.

American science fiction writer, author of the series «People of the Air», Holly Black, which can be purchased in Ukraine, said she would terminate all the contracts in russia and donate money to help the Ukrainian army.

American science fiction writer, John Crowley, the author of the novel «Egypt», published in russia, joined the boycott of russian publishers and noted he would not renew any contracts. 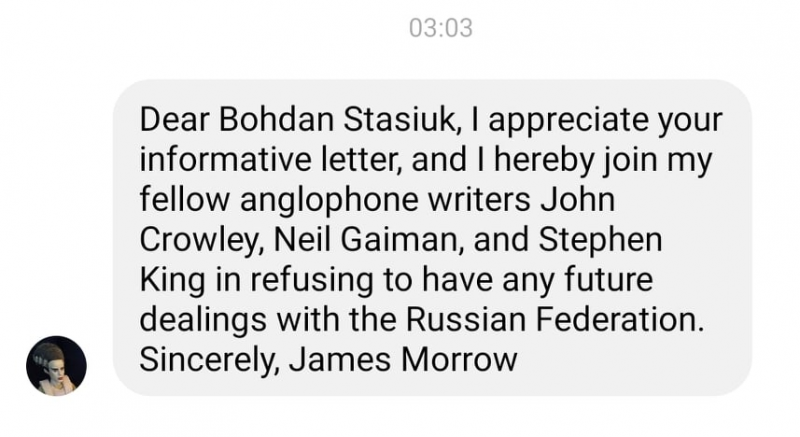 «Like all the intelligent people, I am stunned and horrified by russia’s illegal and completely unjustified invasion of Ukraine, and I can assure you that I am constantly thinking about the plight of you and your compatriots. I have personally made a significant donation to the Humanitarian Appeal of the Emergency Committee of Ukraine, and this agency has stopped any business in Russia».

Charles Stross, a British writer and author of «Singularity Sky», who has already spoken out in support of Ukraine, posted on his blog a letter from Ukrainian cultural figures asking them to send money from russian book sales to Ukrainian charities and sever contacts with russian publishers.

Referring to the same letter, polish science-fiction writer, Jakub Ćwiek, whose books were to be published in russia, noted that he was terminating all the contacts with russian publishers and donating income from his series «The Liar» to the Foundation for the reconstruction of Ukraine.

The family of Polish science fiction writers, Maya Lydia Kossakovskaya, author of the book «The Sower of the Wind», published in russia, and Yaroslav Gzhendovich, author of the series «The Lord of the Ice Garden», refused to cooperate with russian federation «due to its illegal, unjustified and unacceptable attack on an independent and democratic Ukraine».

Writer Marta Kladz-Kotsot, one of the authors of the «Time of Cruel Dreams», published in Ukraine, has refused to publish her literary, scientific and journalistic texts on the russian market.

Marta Krajewska, the author of the fantasy «Go and wait for the frosts», published in russia did the same.

Science fiction writer, Arkady Saulsky, the author of the «Red Lotus» novel, published in russia and scheduled for release in Ukraine, said there would be no continuation of the book series in russia, and he would donate money from the already sold copies to help refugees and victims in Ukraine: «It seems very funny to me, that russian company will pay money to Ukrainian families :)».

In addition, the Polish publishing house Powergraph also abandoned all the contracts with russia.

British writer, Stephen Fry, whose book «Mythos» was published in russia, expressed support for Ukrainians, but also wrote that he sympathized with «my russian friends and followers, who are forbidden to protest and express shame and indignation at the horrors of their mad and brutal leader».

Love and support to the brave people of Ukraine, and to my Russian friends and followers banned from protesting and expressing their shame and indignation at the horrors perpetrated by their deranged and brutal leader #solidarityWithUkraine pic.twitter.com/MVCiEHKm3d

We would like to remind you that writers from all over the world, including Alison Killing, Neil Gaiman and Bernardine Evaristo, called for Ukrainian refugees donations. Also, world-renowned authors are terminating book contracts in russian federation.